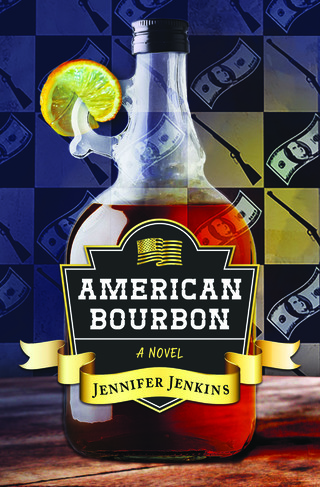 A compelling and potent family saga filled with evocative characters as strong and flinty as the Appalachia hills … a smooth plot that goes down with an easy, clean finish.
-Tony Ray Morris, author of Deep River Blues

A day of reckoning, as thick as the fog in Virginia’s Blue Ridge Mountains, looms over the McKinsey clan in this spirited tale of fury, whiskey and grief. And while Jenkins’ rendering of Caleb, the abusive and hard-driving patriarch who parlays an illegal moonshining operation into a multi-million dollar company, is harsh, there is grace to be found among his three grown children as they find their way back to one another. Illuminating, nuanced and heartfelt, American Bourbon is the story of how a family evolves, salves its wounds and moves forward.
-Laurie Loewenstein, author of Death of a Rainmaker

Peopled with a cast of characters and a setting out of an early Cormac McCarthy novel, “American Bourbon”, like a fine bourbon itself, starts out with a burn, working its way through you, then settling into your bones, where memories of the journey, linger.
-Jeff Talarigo, author of The Pearl Diver

Brassy young women like Brigit McKinsey are courageously rising up all over America, especially in rural areas where they have traditionally been ignored, to not only survive families tortured by alcoholism and abuse but to triumph in their own right.
-Kaylie Jones, author of A Soldier's Daughter Never Cries, inspiration for the Merchant Ivory film

Jennifer Jenkins’ compelling novel American Bourbon traces the struggles of a Virginia family grappling with the legacy of old-school moonshining in the modern world. With sinuous prose, Jenkins has written a truly American novel, depicting a family caught in the trap of alcoholism, family secrets, and the search for love in the midst of pain and fear. The scars of this family are passed from generation to generation. The McKinsey children in Touraine, Virginia, are the inheritors of a moonshine empire from their dominating, alcoholic patriarch Caleb, who has never been able to come to terms with his own demons. The three McKinsey children try to cut their own paths out of the mountains. Brigit, the youngest, wants to take over and expand the family’s Bourbon Sweet Tea distillery; Mack struggles with alcoholism and his dream of landscaping rather than moonshining; while Kieran, broken-hearted, has run away, leaving a hole in the family heart. When Caleb is on his death-bed, the children have to find a way to come together in spite of the anguish of alcohol in their blood. A deeply moving and realistic portrait of a bourbon-soaked American family, Jenkins' characters will make you laugh and cry and root for the triumph of love and kinship over fear, violence and booze.
- Taylor Polites, author of The Rebel Wife, an Oprah Magazine Top Ten Pick

A family saga of modern-day moonshine, murder, and triumph.